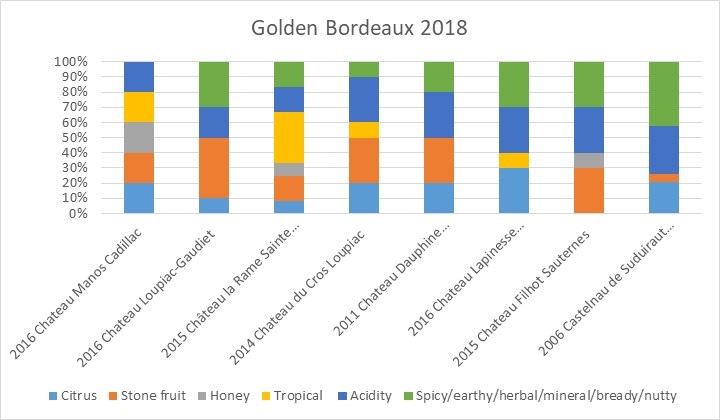 There are two basic, intentional approaches to food and wine pairing: mirroring the flavors and weight of a wine with similar foods resulting in what I like to call “a sublime experience” and contrasting pairings, a “high-risk, high-reward approach” that works the opposite ends of the flavor spectrum for maximum impact. As to which approach results in optimal enjoyment, that’s entirely up to the taster.

Such was the case during a recent #GoGoldenBordeaux tasting hosted by the wine-loving folks at Snooth and Mary Gorman-McAdams MW who provided a primer on the region and key insights in to the vintages and styles. The snack pack that was sent along with the eight wines listed below included a range of bold, spicy treats that provided immediate satisfaction and loads of inspiration for those participating in the virtual tasting. This is one pairing exercise that gave the contrasting approach a run for its money.

With thanks to everyone who participated, I’ve cherry picked some of the most inspired pairings from the comment thread to share here in addition to the snacks we all tasted. When you’re unexpectedly enjoying what you’re tasting, the chemistry behind the success of that experience suddenly becomes more interesting (as long as the explanation only lasts as long as the bite you’re contemplating) but instead of parsing molecules, I took the big picture approach.

I’ve compiled a simple bar graph that ranks the snacks by my perception of the two dominant flavor drivers – intensity of spice and saltiness (as other flavors like earthiness for beets and sweet potatoes and umami for jerkey and salami are more obvious) on a combined scale of one to five.  Not every taster would agree but this is a subjective exercise that we’re attempting to quantify.

Now for the wines. We had a representative tasting that included wines from the Sauternes, Cadillac, Loupiac and Sainte Croix du Mont AOPs:

The tension between sweet and savory emerged as a theme for the tasting. While many of the wines had freshness, the success of the pairings with these salty, spicy snacks didn’t rely on acidity per se. I’ve compiled a visual tasting note for each wine that represents a consensus on behalf of the tasters (number of times a descriptor was used etc.) of the main sensory attributes of the wine.  How’d I do?

We can see there are very clear differences in the flavor profiles of the wines and, based on the comments of the tasters, we can identify successful and likely to be successful mirrored and contrasting pairings. However, some of the umami-driven snacks like the spicy beef jerkey and the salami seemed to work universally for several tasters.  Let’s break it down.

Suggested pairings with the wines that were youthful and more fruit forward included:

One taster observed that he far preferred “the younger wines (2015 and 2016) that showed more primary fruit and some notes of botrytis with food” and the older vintages (2006, 2011 and 2014) that had a higher percentage of savory (spicy, earthy, herbal, mineral, bready, nutty) as meditation wines.

The wines like Chateau du Cros Loupiac 2014 and Château la Rame Sainte Croix du Mont 2015 that bridged both fruit and savory seemed to be the most versatile. One taster suggested baked ham, something that would perfectly mirror both the sweet and savory umami notes while another went with truffled French fries for this style.

Jalapeno chicken chips (salt was off the chart for me here)

Roast turkey (it was Thanksgiving after all)

The take away.  Much to my surprise, acidity and residual sugar the two drivers that typically spell success or failure for food pairings both seemed to take a back seat to the complexity and balance demonstrated by these wines.  I particularly liked the umami flavors with the savory wines and the heat with the more youthful and primary styles.

I hope you’re inspired by this extraordinary tasting experience.