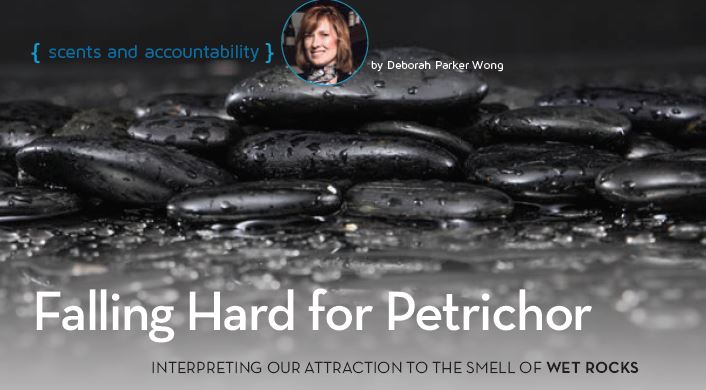 Even knowing full well that geological minerals (with the exception of
halite, aka sodium chloride) have no smell, we’ve inherited a liking for the smell of petrichor from our ancestors, who relied on rain for their day-to-day survival.

The term, derived from the Greek words petra (stone) and ichor (the blood
of the gods), was coined by researchers Isabel Joy Bear and Richard Thomas in their 1964 paper “Nature of Argillaceous Odour” to describe the scent of rain.

At the time, the source of this particular smell was still unknown to scientists, but it had already been successfully captured in sandalwood oil by an Indian perfumer who called it matti ka attar, or “earth perfume.”

Bear and Thomas, who were working in the Division of Mineral Chemistry at Australia’s Commonwealth Scientific and Industrial Research Organisation (CSIRO), mimicked the humid conditions experienced prior to a rainstorm by steam-distilling rocks that had been exposed to warm,
dry conditions.

The experiment produced an aromatic, yellowish oil that shared the same distinctive smell, which the researchers promptly named petrichor—the blood of the stone.

Petrichor is a combination of several fragrant chemical compounds, and while some have yet to be identified, one is 2-isopropyl-3-methoxy-pyrazine (IPMP). Also found in Cabernet Sauvignon and Sauvignon Blanc grapes, it has a very “rain-like”smell.

Beyond plant oils, the primary contributors to petrichor’s complex aromatics are actinobacteria, a genus of soil-dwelling bacteria. Actinobacteria decompose dead and decaying organic matter into simple chemical compounds, and a byproduct of that activity is the organic
compound geosmin.

When the air becomes more humid and moistens the ground prior to a rainstorm, actinobacteria speed up their activity and produce more geosmin, which is the dominant aromatic compound in petrichor. Also found in beets, it can be considered a flaw or fault when readily apparent in wine and has a very low threshold for human detection
at 5 parts per trillion.

It wasn’t until 2010 that the “petrichor process” was documented on slow motion video by a team of scientists at the Massachusetts Institute of Technology. Using high speed cameras, they witnessed how tiny air bubbles are created when a raindrop hits a porous surface; the bubbles shoot upwards, bursting from the drop in a cloud of aerosols that carry volatile aromas (and even bacteria and viruses) found on rocks and soils that are then spread by the wind.

Another compound associated with the smell of rain is ozone, created when lightning or ultraviolet light in the atmosphere splits oxygen molecules that then reform to create trioxygen.

The average human nose can pick out the distinctive smell of ozone—often described as the “clean” smell after a rainstorm—at a concentration
as little as 10 parts per billion; due to this higher detection threshold, ozone can be masked when geosmin is present.

In a subsequent paper, “The Genesis of Petrichor,” Bear and Thomas elaborated on the process by which rocks, clay, and soil absorb organic compounds. Silica absorbs more atmospheric contaminants—compounds
like lipids, terpenes, carotenoids, and other volatile decomposition products— when humidity is low. Those compounds are increasingly oxidized and transformed when it’s hot, and their volatile aroma compounds combine to produce petrichor when humidity increases before and during a rainstorm.

All of the organisms and compounds that have been identified in petrichor can be found in any given vineyard, and as a result, many can also be found in grapes and wine—for better or for worse. But regardless of the result, our appreciation of that unique scent known as earth’s perfume is seemingly innate.