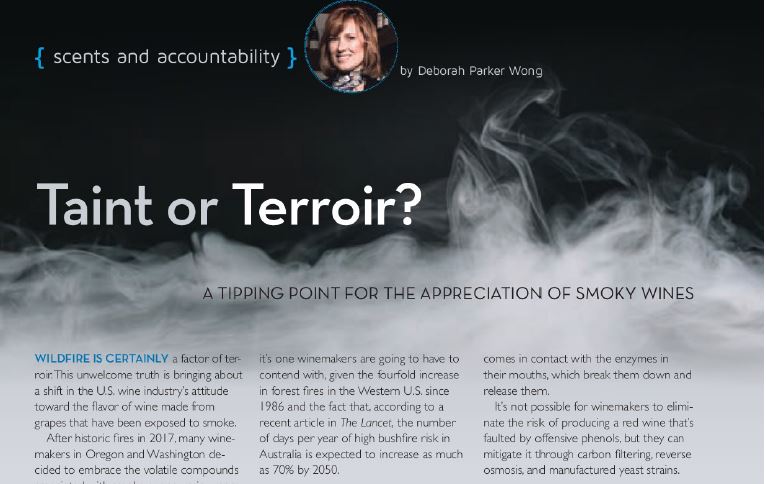 A tipping point for the appreciation of smoky wines

Wildfire is certainly a factor of terroir. This unwelcome truth is bringing about a shift in the U.S. wine industry’s attitude toward the flavor of wine made from grapes that have been exposed to smoke.

After historic fires in 2017, many winemakers in Oregon and Washington decided to embrace the volatile compounds associated with smoke exposure in grapes such as guaiacol and 4-methylguaiacol, which are released during fermentation.

While using techniques like whole-bunch pressing to minimize smokiness, they didn’t try to hide it entirely. Because these volatile phenols reside in grape skins, whites and rosés that are pressed off of the skins immediately after harvest carry less risk for taint.

Winemaker Darryl Joannides of Viola Wine Cellars in Portland made a lightly smoked Dolcetto rosé that was a hit at local wine bars. “We focused on making younger, fresher styles that we could get to market quickly,” he says. “If I’m faced with that situation again, I’m planning on making as much rosé as I possibly can.”

Teutonic Wine Company’s Barnaby Tuttle, meanwhile, produced a skin-contact Riesling that tested for high levels of guaiacol in a style he dubbed Rauchwein (a play on Rauchbier, or “smoked beer” in German). The resulting wine had a subtle smoky aroma, more texture than the average Riesling, and a mezcal-like finish.

In his 2019 book Flawless: Understanding Faults in Wine, Jamie Goode characterizes smoke taint as an automatic fault. But it’s one winemakers are going to have to contend with, given the fourfold increase in forest fires in the Western U.S. since 1986 and the fact that, according to a recent article in The Lancet, the number of days per year of high bushfire risk in Australia is expected to increase as much as 70% by 2050.

Consumers enjoy the flavor of smoke in many food and beverage products, including wine: When derived from the process of aging in toasted oak barrels, low levels of guaiacol and 4-methylguaiacol are described positively as toast, smoke, char, and even camphor. But when they overwhelm a wine’s varietal character, they’re treated as a fault.

In the extreme, smoke-tainted wines are often described as smelling and tasting like a wet ashtray, medicine, or burnt bacon (which some of us admittedly enjoy). Sensory testing at the Australian Wine Research Institute (AWRI) has shown that up to 20% of people cannot taste smoke flavors in wines that others find unpalatable. For the remaining 80%, the smoky phenols can go undetected until the wine comes in contact with the enzymes in their mouths, which break them down and release them.

To mirror or mitigate

It’s not possible for winemakers to eliminate the risk of producing a red wine that’s faulted by offensive phenols, but they can mitigate it through carbon filtering, reverse osmosis, and manufactured yeast strains. According to researchers at AWRI, oak treatments and tannin additions can also mask some of the effects of mild smoke exposure by amplifying the same compounds that are found in wood smoke, including lactones, eugenol, and guaiacol. Some of these also exist in certain grape varieties, like Syrah.

Anticipate more rosés, early-drinking reds, and even skin-contact whites as they seek to get the most out of high-quality fruit that might otherwise be destined for the bulk market due to smoke exposure.

Read Esther Mobley's "How to tell if a wine was farmed with Roundup," in which she says "The best resource I can recommend is the #SlowWineGuide, an annual publication that vets wineries for a range of ecological criteria. The guide recommends wineries that do not use chemically synthesized fertilizers (like Roundup), and also checks for things like water use, sustainably constructed buildings and intervention during the winemaking process." Link in bio.
I’m honored to be studying at Fresno State and inspired by my PI Dr. Miguel Pedroza!
Volcanologist Mauro Cotelli reveals Mt. Enta’s secrets @etnadocwine #Etnadays. From a distance, she’s magnetic; up close a personal she’s dark and challenging.
Fred Franzia passes at 79, many of his choices continue to benefit the industry and consumers - deborahparkerwong.files.wordpress.com/2016/06/franzi…
Cheers @brigaldara Thank you for the vicarious visit to #Valpolicella and your #CaseVecie and #Cavalo crus of Valpatena
Tasting the rare and beautiful w Jerry Eisterhold @terravox_winery #Cloeta was the star of this show.